This is an online encyclopedia of personalities of Old Time Radio. It is designed for educational and entertainment purposes.

Please sign my guest book... I will answer most questions here...

LoyalTubist
Needles, California, United States
Billy Jack Long is a professional musician and author from Southern California. Any paid advertising you see on this page was not put her by Bill. Ignore it and it should go away. 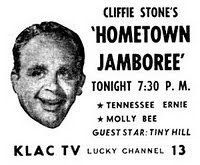 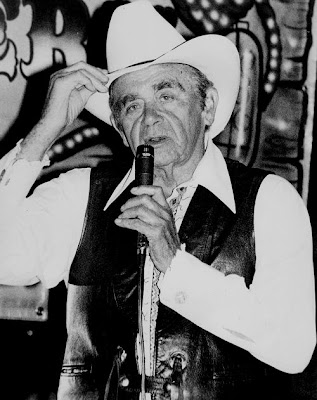 Clifford Gilpin Snyder was born March 1, 1917, in Stockton, California (according to his widow), and grew up in Burbank (most sources state that he was born in Burbank). At the age of 16, he became the bass player for Stuart Hamblen (1908-89), a country musician who wrote a number of songs usually sung in Evangelical church services today.
Cliffie grew up in a musical family. His father, Clifford Herman Snyder (1884-1964), went by the stage name of Herman the Hermit, renowned banjo playing comedian. Cliffie originally called himself Cliffie Stonehead, which was later shortened to Stone. This was so he could become a musician on his own merit and not riding on his dad's coattails.

After playing with Stuart Hamblen, Cliffie played with some of the first big bands (swing style) in the early 1930s, namely Anson Weeks (1896-1969), and Freddie Slack (1910-65). Cliffie was a disc jockey on a couple of Los Angeles area stations. He began working in radio hosting a show called Dinner Bell Roundup and heard on KPAS in Pasadena in 1945. That radio station became KXLA a couple of years later. In the late 1950s it became KRLA.

In 1946, in addition to working on the radio, he became the A&R (artists and repertoire) man at Capitol Records in Hollywood. Some of the people he signed up included Tennessee Ernie Ford, Merle Travis, Molly Bee, Hank Thompson, Les Paul, and Stan Freberg. He would later become Tennessee Ernie's manager.

Dinner Bell Roundup was heard between 11:30 a.m. and 12:30 p.m. for many years before it moved to Saturday night and became Hometown Jamboree. That moved to KLAC-TV (today KCOP) on TV. Later it moved to KTLA.

Cliffie was also a songwriter. He wrote books about songwriting. The man, whom some people who watched him and wondered how come he didn't do anything except announce, was one of the most truly talented men in entertainment. 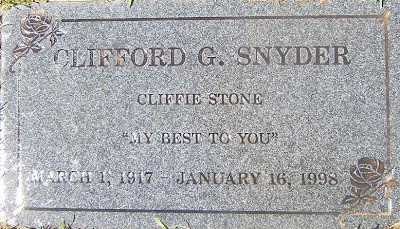 He married his first wife, Dorothy Darling, in 1939. They were married for 50 years until her death in 1989. They had four children: Stephen, Linda, Curtis and Jonathan. Shortly after this, Cliffie married Joan Carol, an accomplished songwriter in her own right.

Cliffie Stone died January 16, 1998, at his home in Santa Clarita, California, of a heart attack. He is buried at the Eternal Valley Memorial Park in the Newhall section of Santa Clarita. According to his tombstone, he was always Cliffie Snyder, not Cliffie Stone. He never legally changed his name.

In 1999 he was elected to the Country Music Hall of Fame. He also has a star on the Hollywood Walk of Fame.

In the picture below, Cliffie is the next to the last person in Stuart Hamblen's band. He is listed as Cliffie Stonehead. 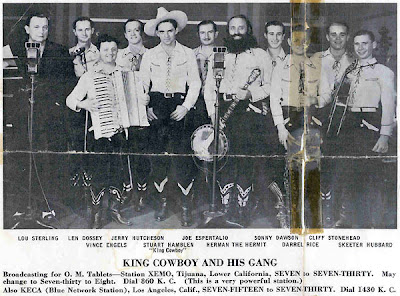 I have one of the Dinner Bell Roundup programs (Wednesday, January 7, 1948). One of the sponsors is a Snyder-Lile Ford-Lincoln-Mercury dealer in Burbank. Something tells me there is a family connection there!

That should have been Snyder-Lynch Ford-Lincoln-Mercury. The ad on the radio show I had said they will rebuild any Ford engine for $99.50. Lowest price in Los Angeles.

Get professional trading signals delivered to your mobile phone daily.

Follow our signals NOW and make up to 270% per day.

BlueHost is definitely the best web-hosting company with plans for any hosting requirements.